I started in our last Little Lesson reading a very kind letter from a person who disagrees with me on my Little Lesson about Mormonism, “Can Mormons Be Christians?” 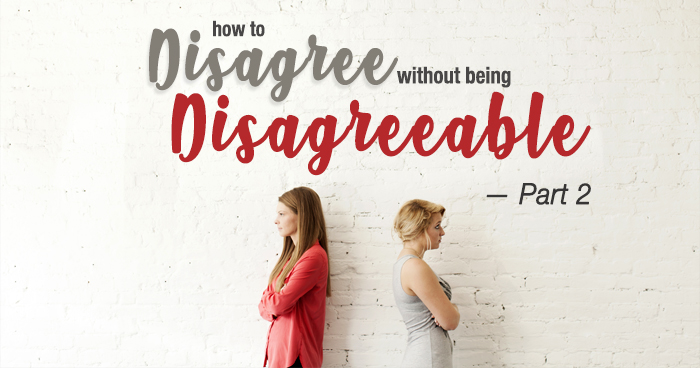 And I knew I would get some feedback and some kickback from that topic, because I know there are people who have studied Mormonism and they know all the bad doctrines. And they might even know some of the dark underbelly of the Mormon faith and so forth.

But that’s not the sum total of everything, and again, I have just only looked at the surface, I don’t have any deep relationships with the Mormon church, but I did tell you my experience. I actually did two videos about Mormonism, I told my experience of visiting a Mormon church.

I read the first two paragraphs, the main premise of this person’s disagreement is “Jesus plus anything isn’t belief unto salvation.” So what she or he is saying is that if you believe in Jesus, but if you add anything to that, any other belief, and I think it’ll become more clear, I think it’s who you’re trusting in is what she’s saying, then you’re not saved. And I don’t agree with that.

“I do believe that there are truly saved people in all kinds of churches who haven’t yet seen the false doctrines in their church or had the courage to walk away or find a biblically sound church yet.” So that’s agreeing with what basically was my premise. You don’t have to have it all perfectly figured out, you don’t have to have perfect doctrine, and she’s agreeing with that.

“And I believe that, on the other side of the coin, there are surely thousands of people in biblical churches who are going by tradition who have never believed unto salvation.” Well, we’re in 100% agreement on that, aren’t we? Sure. Just because you go to church doesn’t make you a Christian.

“But those you speak of, the Mormons,” so here goes the argument, “as in other cults, on the whole they fall under the ‘Jesus plus’ category.” That’s a really good way of saying it. “Basically what I call ‘Jesus plus’ means that, if any added acts are required for salvation, then belief in Christ is not what one has. That would include those required additions promoted in any church, Protestant, Catholic, Mormon, or Jehovah’s Witness, or any sect or denomination claiming to be Christianity.”

Okay, well said, well stated, and very clear communication as to what the premise is. Anything that’s “Jesus plus”, that if you’re required to do anything else but believe in Jesus, then that’s not true salvation. If a denomination says you have to believe in Jesus, but you also have to tithe, if that’s what you believe, you’re going to go to hell. And see, I don’t agree with that.

So this is not salvation by works, it’s salvation unto works. Salvation that does work. When you believe in Jesus, that affects what you do. But again, she’s bringing up the point that if someone’s teaching, “You have to believe in Jesus, plus you have to do this,” if that’s what you’re following, you’re not saved. And I, again, don’t agree with that.

“So therefore, one type of false belief is when a church or denomination or person believes that making it into the heavenly finish line requires power from themselves, or traditions, or penance, or works, or effort, or giving, or baptism, or filling, or saving a certain amount of souls, etc. times infinite items.” Just elaborating on that previous point.

“What I’m pretty sure we agree on is that works do accompany genuine faith. Yes, as you said that you will know them by their fruit, works. This means the fruit is evidence of salvation, not the means to it.” I agree 100%.

“The simplicity and mind-blowing only way to heaven is through faith in Christ, as full, completed, assured, sealed payment and propitiation.” I guarantee you, no baby Christian probably understands any of that, but they could be saved.

“Adopted in the family, called his own possession, and because of Christ, and zero because of how good we are or some measure on our acts or earning the status.” And I agree wholeheartedly, I just add this little caveat that we’re going to be judged by our works. That’s very clear, over and over again in Scripture, and why? Because works are what validate the faith.

Read Jesus’ future judgment of the sheep and the goats, He said nothing at all about faith, he only talked about works. “I was hungry, you fed me. I was thirsty, you gave me a drink. I was naked, and you clothed me. I was sick and imprisoned, and you visited me. I was a stranger, you invited me in. Come, inherit the kingdom prepared for you from the foundation of the world.”

And then she says, I like this, “The other news is okay news. Jesus alone is the good news.” That’s kinda catchy, I like that. But I think that’s even a little bit of a concession, because it almost contradicts what she said above. She’s saying the other news is okay news, that is the “Jesus plus” stuff, that’s okay. But Jesus alone, that’s the good news. Well, what she said above, it’s really not okay because you can’t get saved in the “Jesus plus” news. So it’s not really okay, but now she’s saying it’s okay. Not acceptable, but okay. As opposed to being the good news.

Now, once again (and I am not going to finish this out today so we’ll just carry on in our next Little Lesson) I agree, in essence, with what she’s writing, but not entirely because I can’t come to the same conclusion. Again, if someone goes to a Catholic church, for example, and they’re told, “To be saved you must believe in Jesus and you must come to mass once a week.” And of course they tell them more than that, but let’s just say they tell them that.

And that person believes that, and so they are trusting that, “Because I believe in Jesus,” which of course is what will actually transform your life and naturally produce lots of good works in your life, “Plus I’m going to church, I go to the mass every single Sunday,” I don’t think Jesus is going to say to that person, “I’m sorry, you didn’t trust in Me 100%, you trusted in going to mass 1%. Off to hell.” That’s where I disagree.

Okay, out of time, way out of time, oh my goodness. Thanks for joining me, I hope to see you next time on Little Lessons.