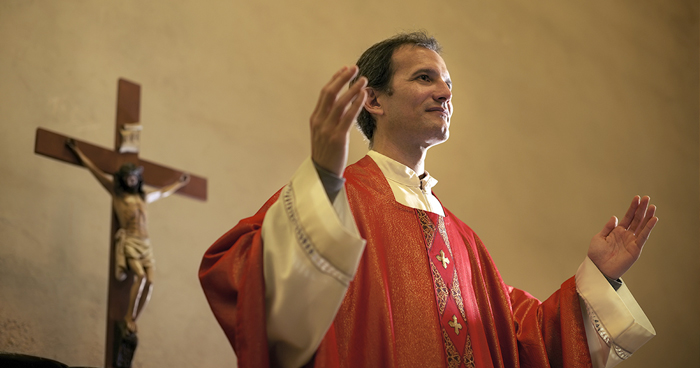 If you’ve been watching the previous four before this, you know that I did a little series on how to disagree without being disagreeable, based on a real nice letter I got from someone who disagreed with a Little Lesson I gave about, “Can Mormons be Christians?” And actually, they agreed a lot, but they disagreed on basically one major point. So the last four of the lessons, we were looking at that and I was just using the opportunity to also talk about true salvation and what’s required of us, and so forth.

So now on this Little Lesson, I’m going to be looking at another letter from another viewer who’s responding to a Little Lesson I did on, “Can Roman Catholics be Christians?” And they also had some words of caution, just like the person who wrote about Mormonism, and what they say is really good.

I mean, it’s worth me telling you what they said because you could benefit because it’s rich and valuable. All right, so that’s why I’m going to read it. But I’m also going to read it, not only for the information relative to Roman Catholicism, but also as another example of how to disagree without being disagreeable. This is an extremely gracious letter. This is actually from friends of mine. I know them, I’ve actually stayed in their house. They’ve got lovely kids, they’re a sold out family for Jesus, and oh my goodness, they’re fantastic people and dear friends.

So of course already, we have a relationship, I’m going to listen to what they have to say. And I know that on YouTube here, you can put comments, and people write comments. I have a confession to make, I actually rarely read those comments. I mean really rarely, and there’s two reasons. Not because I don’t appreciate the commentators or don’t think they have something valuable to say, but the two reasons are, number one, I’m an extremely busy person. I don’t just do these videos, this is actually a little side thing I do.

I direct a ministry that I founded about 16 years ago called Heaven’s Family and we’re working in 40 countries. We’ve got over 30 US staff members, and I’m the President. I can hardly believe I’m the President, but I’m the President. And although I’ve got some great folks working with me and working under me, I hate to say even under me because they’re in many ways above me, but they’re smart and they take a huge load off of my shoulders and so I get to do this. But I still have a lot of email correspondence, a lot of stuff going on, and I just don’t have the time. Maybe one day when I retire, I’ll be able to start reading all those comments.

The other reason I don’t read those comments is because I’m scared to, quite honestly, because some people are so nasty. I never understood how people can think they’re going to persuade you through nastiness. I mean, they start off their comments with condescending insults. Sometimes I get these long letters from people. They start off with these condescending insults and I feel so sorry for them, because they wasted all their time. They put up a wall, I’m not gonna read any further. Who would read any further?

When friends come to me, people that I love and have known for years, and if they have a disagreement and they start off with an insult, I mean, that doesn’t help. A wall is built right away. It’s hard to receive insults from friends. Why would a stranger ever think that you’re going to persuade somebody by insulting them?

Okay, so I think I’ve already said this, but it bares repetition, if that’s you, you need to go back to school and look for the course called Human Being 101, because you probably don’t have many friends, anyway, if you haven’t figured this out yet. If you want to persuade somebody, the way to do it is love and graciousness and gentleness.

Now here’s the letter from my friends. Listen to this. “Brother David” … Now already it’s off to a great start, because they’re reminding me that they think I’m a brother and so we’re in a family. Already my heart is opening up to what they have to tell me. “Brother David, hope all is well with you.”

Now listen to the grace that continues. It just oozes from their first paragraph. “Please, feel free to do with that as you please.” So, this is not a heavy, “it’s our way or the highway.” No, we’re going to toss this out for your consideration. You do what you want with it. “And please again, we are just sharing with you some of our own experiences and background.” Oh, great and everyone has some experience and background that’s worth sharing, I want to hear about it, okay.

Listen to this humility. “We only know in part, but we know you are a gracious man.” Oh, I’m feeling so good. In the next paragraph, they could tell me I’m an idiot and I would probably accept it because this first paragraph has been so gracious.

“We know you are a gracious man and will take this as it was intended.” So, they’re just calming any fears that I might have by all this love oozing out. “In fact, we have to say thanks for your ministry as it continues to be a great blessing to our family.” Well, that’s just the first paragraph, I’m wide open. My heart is wide open for anything they have to say because the love me and I like being loved. Don’t you like being loved? We all liked being loved.

So she says, “We were Catholics and we, like you, believe it is possible that Catholics can be true disciples of Jesus Christ.” Now, there’s a great technique for persuading somebody. First of all, find the common ground. Let’s not discuss what we disagree about, let’s find out what we agree on first, and then we’ll find that what we disagree about is just a small part of the whole spectrum of things we could disagree on. And we agree on most things, but we just have this one little difference. So in the end, if they haven’t persuaded me, we can still be friends and I don’t have to feel offended because we agree on most things. We’re seeing eye to eye, so there’s that affirmation. That’s very wise.

“Having said all that … ” So now I know the transition is coming. “We never found the Lord in the trappings of this manmade version of Christianity …” Speaking of Roman Catholicism. “And it’s only by the grace of God, calamity, and actually the goodness of God that we found Him.” So what they’re saying is, the Catholic Church, we didn’t get saved there. It was by the grace of God, something outside of the Catholic Church is what caused us to find Christ. I think that’s a lot of people’s testimony and I understand why, because it’s easy to miss Jesus truly in the Roman Catholic church, just as it is in many Protestant churches. You could totally miss the most fundamental truths because of all the trappings and all the other manmade stuff.

Okay, well, we’re out of time for today, so we’ll pickup right here on the next Little Lesson as we talk about those Roman Catholics that Jesus loves and died for. Hope to see you then.