We do get all kinds of questions, and today’s question is one we’ve received more than once. Some of our honest viewers, sincere viewers, want an answer. Is it wrong for women to wear makeup? 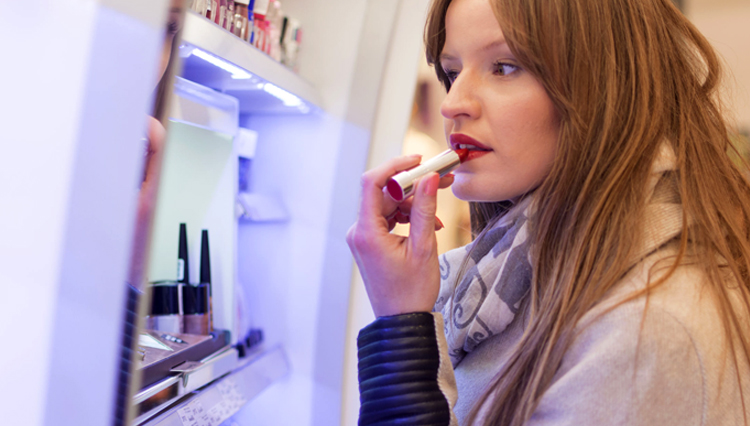 The reason that it is sometimes felt by some within the body of Christ that this is wrong is because it’s based on vanity. You’re trying to make yourself more attractive in a vain way, so therefore it shouldn’t be done.

Well, I think it’s worth thinking about a little bit, because we really can’t find any specific condemnation in Scripture of women wearing makeup.

If Makeup is Vanity, What About Brushing Your Hair?

I think we can also think to ourselves that it can’t be totally wrong to be taking care of yourself so that you’re at least not repulsive to other people. We are supposed to love our neighbor as ourselves, and so that’s one reason why it’s good to brush your teeth and good to use a breath mint and accept any breath mint that is offered to you and never turn one down!

It’s good to comb your hair. If those things are vanity, then we could just follow that logic and say we should not brush our teeth or comb our hair or do anything to make our appearance acceptable or even pleasing to other people, and that we should all look like Neanderthals, with long unkept, uncut dirty hair and dirty faces, and horrible breath, because we sure don’t want to be vain, do we, focused on ourselves? No, no.

I believe that taking care of ourselves can also be an act of love towards the people around us, by the illustration that I’ve just offered.

The Fallacy of Legalism

What’s so interesting is legalist are always setting certain standards, they’ll draw a line somewhere and they say, “Here’s the standard.” But the standards are often arbitrarily set and they violate the very principles that they espouse by setting a standard at a certain place and then everything’s okay, that’s on one side of that standard, but everything’s not okay, that’s on the other side of that standard.

So in some circles it’s a sin to wear makeup, but you’re expected to at least comb your hair, and either one could be considered vanity, if you want look at it that way. But it can also considered an act of love.

Created to Be Beautiful

If you are a married woman, well then you can walk in love towards your husband by asking him this question. Don’t send it to Little Lessons, who am I to be telling you what you should be doing or not doing, as far as making yourself attractive in one way the other! I don’t know what your husband likes.

We know of course that beauty is in the eyes of the beholder, we know that a lot of beauty standards are purely cultural and we’re taught what makes a person attractive and what doesn’t make them attractive, these are arbitrary standards set by cultures often times.

Striving to Please Your Spouse

I think we should best answer this question, “Are we walking in love in what we’re doing?” If you are a married women, then I think it’s a loving thing to ask your husband, “Dear, do you want makeup or no makeup, how much or how little, long hair or short hair?” And do your best as to please him.

I think that it’s okay for husbands to do the same thing, “Do you like this beard, do you want it to be unkept and scraggly or do you want no beard? And my hair, how do you want it?”

You’re trying to walk in love, speak their love language, show the other person that you do care about what they think and you’re trying to please them. Now if you’re unmarried, you got a little bit more of a difficult situation. But let’s face it, part of the whole premarital game that we have to play is you’re trying to make yourself as attractive as possible.

Again, I’ve emphasized this in another Little Lesson, not just your outward appearance, but also of course your character. These are much more important things, the character issues.

But let’s face it, the physical side is a part of it. You’re not just marrying someone’s character. When you get married you’re marrying the whole person, and that person is in a body, and that person has a face.

The funniest thing I think I ever heard on this question was by an old Pentecostal preacher who said, “I think in some cases it’s a sin for some women not to wear makeup.” I’m not totally sure what he was trying to convey there, but I think he was trying to say that maybe it’s not so wrong.

There are groups that are just dead set against it of course, and if you’re a part of one of those groups, well they’re going to judge you if you don’t conform to their standards, which they have set. They’re going to quote you some scriptures about Jezebel painting her eyes. But I bet you Jezebel brushed her teeth too, and so that doesn’t make it wrong for you to brush your teeth or necessarily to wear a little eye makeup.

I’ll continue this discussion on our next Little Lesson. It’s amazing, you can go two Little Lessons on this subject! Thanks for joining me. God bless you.