Are you thinking about forever? We’re all probably less focused on eternity than we should be. 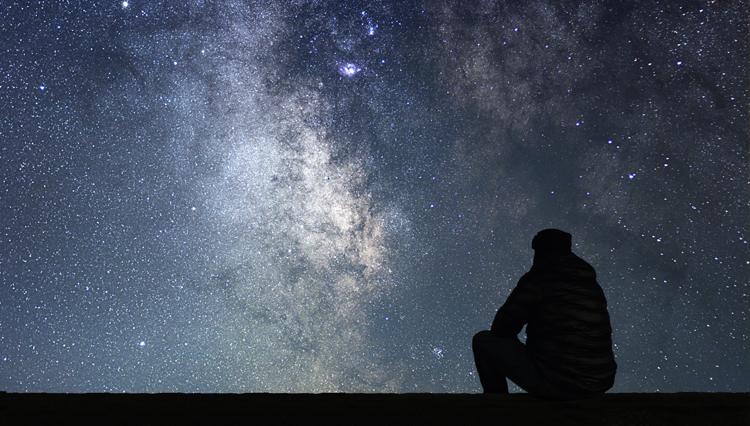 Hi, welcome to today’s Little Lesson. Thanks for joining me. You know if you’ve been watching Little Lessons that we’re working our way through the Sermon on the Mount and we’re just finishing out the Lord’s prayer, which is a magnificent prayer. You can pray it verbatim or you can use it as kind of a pattern for prayer.

Either way, it’s great and there’s so much good spiritual truth that we can learn about. I want to point out in our Little Lesson today that this prayer that the Lord taught us to pray really focuses the prayers’ mind and heart on heavenly spiritual things. It starts off, “Our Father, Who art in heaven, Hallowed be Thy Name. Your Kingdom come, Your Will be done, On earth as it is in Heaven.” It’s so heavenly-minded to get our minds in heaven.

Paul wrote to the Christians, I think it’s in Colossi, “Set your affection on things above, and not on things upon this earth. For you are dead, and your life is hidden with Christ in God.” Jesus is going to talk about what we did here in the future, you know, lay up your treasure there in heaven because where your treasure is, that’s where your heart’s going to be. So God wants us focus more on heaven.

You know what? It’s not easy because all of our senses, our five senses are all part of this world and our daily lives are in this world, and it takes a concentrated effort to be thinking about heavenly things. I think this is why Jesus perhaps in this prayer tried to focus us right from the beginning. You know, “Think about heaven. Think about father in heaven, think about God’s will being done in heaven,” and it closes, bring us right back into that spiritual dimension and to the magnificence of God.

This is actually parenthetically stated in the new American Standard version so I don’t know what that means. Some people say it means it actually wasn’t part of the original manuscript, but anyways, it’s a great part of the prayer so I’m not going to toss it out. Here’s what we’re praying, “For yours is the kingdom, and the power, and the glory.” Here’s the last word, forever, and it almost needs to be whispered, doesn’t it?

Because of the … I don’t know, just the thought of forever and God having a kingdom forever and ever and him having the power and the glory forever puts life in perspective, doesn’t it? Puts a lot of little things in their perspective where they really aren’t all that important. What’s really important is forever. God wants our minds focused on the forever. That’s why Jesus talked about, don’t lay up treasure on earth, lay up in heaven.

Once your heart’s there, he wants us focus there because it’s forever, yet everything that we can see, everything we can touch, everything, everything in this material world one day will be gone, right? We marvel at those who are living in darkness how they love the darkness and they’re living their lives as if there is no tomorrow that when you die, you die. That’s it. You’re gone.

You know, and just to think, just to think about how preposterous that thought is when you just look at the human body and the complexity, just the chemical and the molecular complexity to our body and to think that that was created just to be good for 70 or 80 years and then poof, nothing. The richness of the human experience, the gaining of knowledge, the relationships, the joy of relationships with our families and friends and other people, the richness of life and to think that God designed all this and he says, “Okay, enough of that. You did your 70 or 80 years,” what? What?

Are you kidding me? You know, that doesn’t make sense. A God who can do that doesn’t just crumble up and throw it in the waste basket. No, no, no. There’s got to be something beyond. Just about every religion, whether it’s a divine origin or demonic origin for that matter, they often have some kind of a concept or a belief that there’s life after death because I believe that that also is something that’s built intuitively within every person. That everyone intuitively knows that there’s life after death. That intuitive concept has made its way into so many religions and also because of just the absurdity of thinking that this marvelous life, it was only intended to last for a few decades. It just doesn’t make sense.

All that is to say that we marvel at people who aren’t thinking about eternity, but yet we ourselves, myself too, are probably less focused on eternity than we could or should be. Again, I’m not pointing the finger of condemnation at anybody. I have no right to do that. I’m just trying to encourage us, right? Trying to encourage us to think like Jesus wants us to think, to get our perspective spiritual, heavenly and eternal.

The example I’ve used many times about laying up treasures the one about if somebody was to say to you, “Hey, here’s a million dollars and I want you to build two houses, it’s a free gift. Build two houses, one you’re going to live in for a day, and the other one you’ll live in the rest of your life.” Well, how much money would you spend on the one day house?

Well, if you’re smart, you’ll build a doghouse and crawl and do it and sleep there one night and the next day you go out and build your 999,000 whatever house because it only makes sense to invest in what is lasting. Something to think about for all of us. Okay. Thank you so much for joining me on today’s little lesson. Hope to see you next time. God bless you.