Was the thief on the cross saved by faith alone? 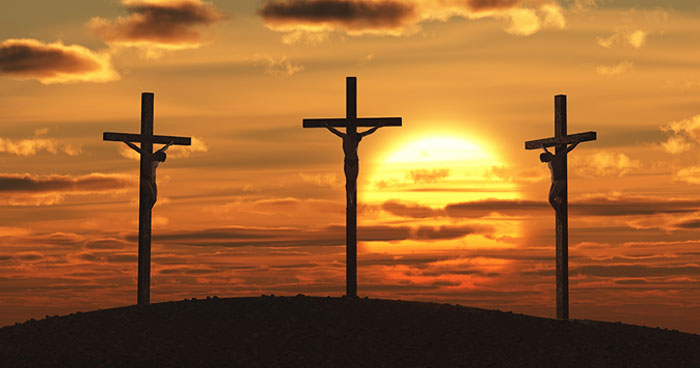 This is actually the fourth in kind of an ongoing series of little lessons that we started by reading a really nice letter from one of our viewers. It was a kind, gentle, gracious letter of disagreement about something that I taught regarding the question, can Mormons be Christians?

Actually, I saw this letter as an opportunity to talk about other issues that are raised, theological issues that are raised. It’s a very, very insightful letter, well-written letter, gracious letter, and I was using this first of all, as an example of how to disagree without being disagreeable. But, we’ve kind of now slid into looking at some of the premises and beliefs that are reflected in this letter. They’re believed by so many people, and myself at one time. So, I’m kind of, I guess taking advantage of that. So, if you didn’t see the previous three videos, it’s less than ideal that you’re just going to just watch this one.

This person, this good person says that, “Faith alone, in Christ alone, leads to true salvation.” That’s in contrast to, faith plus something else. So, if you have faith plus something else, this person’s saying that does not constitute true salvation. “This subsequently also means abandoning all other ways to God,” that is means of being accepted to Him. “Real faith, saving faith, banks on Christ plus nothing.” In all capital letters there, NOTHING. “Fruit of the Spirit, traditions, sharing faith, helping the poor, spiritual growth, change of heart, et cetera. These follow real faith.” Amen. Way to go. We agree 100% on that. I like that, and thank you for saying that. I’m glad you believe that.

This person writes, “The key here is that these follow,” in all capital letters, FOLLOW. “They do not qualify anyone for heaven. Just ask the thief on the cross what he added to his life of sin. Nothing. And that is what you and I add to make us fit for heaven.” I couldn’t agree more with that, except the fact that the thief on the cross, actually did have some works.

You could see his faith, because he looked at Jesus, “Remember me, when You enter into  Your kingdom.” So there’s the faith. It’s expressed by the confession of his mouth. Remember, “I believe in You, so therefore I’m asking something of You.” I think he also then rebuked the other thief, who was saying, “Hey if you’re the Lord, get us out of here, and forth.” So, he defended the One he believed in. He couldn’t do many actions there hanging on the cross. He was literally nailed to the cross, but words are a form of actions, and that guy had the right words coming out of his mouth. So, there you see his faith was working. Hallelujah.

If he would of, from the cross, after he said, “Lord remember me when you come to your kingdom,” then verbally denied the Lord, that would be an indication by his works, the works of his mouth, that he didn’t have true faith. Right? Right.

So, there’s always got to be works accompanying the faith, and that’s exactly why James say in James 2:24, “So we see that a man is justified by works, and not by faith alone.” That’s what this person is essentially saying. The only place that I disagree with this person is, they are saying if you make that error trusting in Jesus plus something else, you’re not truly saved.

And, I’m just saying that, “No. God is more gracious than that.” He allows obviously all of us to have some false doctrine, that would be un-biblical, and we can still get to heaven with that. You can have some spurious ideas about Jesus, or not have Him figured out exactly, fully understanding Him. I mean, who can really say, “I fully have figured Jesus out 100%? I know Him perfectly.” None of us I think can say that.

So, anyways, “Once we are saved in different ways of the seasons, we grow.” That’s right. “But, if one’s faith is based on anything added of their own efforts, for heaven’s entrance, if one says that the finished work was not enough, then we don’t have genuine faith.” That’s where, again we disagree. That’s it, and I’ve said that again.

“Now that aside” … Isn’t that nice? Okay, so this is so gracious, love this person. “Now that aside, there are not small issues of difference with the true Christ and the God of the Mormon church, but gaping cult points that weave darkly into deceived hearts. If you were to attend any truly biblical college or seminary, i.e. Dallas or Multnomah or Moody, not one professor would say that Mormons on the whole, know the real Christ.” Well yeah, they’re going to point out their false beliefs about Christ. I said, they say, we believe in Jesus as the divine son of God, who died on the cross for our sins. Okay. And, I’m saying, if they truly believe that, and it transforms their life, that’s enough.

“They would warn unsaved and baby Christians to not entertain conversations to get drawn in to the crafty false teachings.” So, this person writes to me, “Please be careful. Here’s a book that is simple and super helpful in the differences on both denominations, and a few cults compared with real Christianity. The simple biblical truth is presented without being shaming or elitist. It’s a book called, “So What’s the Difference?” It’s by Fritz Ridenour.” Well, that’s an old book. I read that book 40 years ago. It’s a great little book, great little book. Okay, and it compares Christianity, Christian doctrine to different cults.

“Then, another one, another book was written by that couple who I mentioned, who used to be up in leadership of the Mormon church.” So, she referenced that in the first part of her letter. “Please, before you talk more on these churches, read more,” and she gives me the link for this book called, “Understanding Mormonism Comparative Resource Manual.” “This couple talks of the holy underwear,” you know about that? The Mormon’s have the holy underwear.

Well, are they going to go to hell if they believe in Jesus? Let’s say they think, “I believe in Jesus, and I have to wear the holy underwear.” Let’s say they believe in Jesus, and it transforms their life, and they’re born again. They start serving Him. There’s all this fruit in their life, but they keep wearing the holy underwear, thinking mistakenly that they have to do that to go to heaven. When they stand before Jesus, is Jesus going to say, “Well you lived an exemplary life ever since you repented and believed in Me. You gave to the poor. You showed the fruit of the Spirit. The Holy Spirit was in you, flowing from you. You did acts of service, and you were humble, and so forth. But, you thought you had to wear the holy underwear, and so to hell with you, Mormon.” I don’t think so.

“This couple talks of the holy underwear, and asking God, why they weren’t experiencing him in their marriage and lives. They heard clearly that the Mormon undergarments were cursed and demonic, and to remove them and put on other clothes. It starts from there, and only gets creepier.” Well now, okay. “Please learn more on their book.”

Well, people write to me all the time, and tell me to read certain books, and I honestly appreciate that. If I had time to read all the books, oh someday I will. I direct a ministry called, Heaven’s Family, and I’ve got a wonderful staff of like 30 some people, just in the U.S.. I work with people all over the world, and so forth. I’ve got super staff, and they have relieved me of a lot of stuff that I used to have to do, but I’m still a busy guy. I just don’t have time.

I would love to read this book, but I’m a little skeptical on the holy underwear. Somehow, if you wear the holy underwear, that that’s demonic, and that’s going to curse your marriage. Okay, I’m not a big believer in that.

“I truly beg you, as a voice that people listen to.” Well, that’s nice, I don’t have actually that many people that listen to me. “This is a dangerous video,” speaking of my video that I did on Mormonism, and “I don’t think you mean to do harm.” Well, thank you. There’s some grace coming through. I didn’t mean to do any harm. “But, it requires great editing to be biblically and experientially accurate. Thank you.”

See, so my original point of sharing this was to show you how to disagree without being disagreeable. This person did absolutely marvelously. And, we still disagree, yeah. How about that, but I still absolutely love this person. Thank you for taking the time to write.

Once again, I’m over time, so I’m going to say goodbye for today. God bless you.