What’s lacking overall in the “marriage permanence” doctrine is grace. There’s a little grace, if you’ll divorce and live a single life until your original spouse dies. You can go to heaven then, but other than that, you can’t. You’re going to go to hell because you’re living in adultery, by their definition. 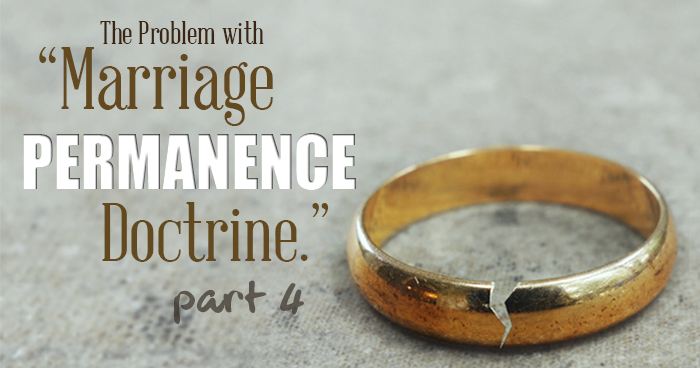 I believe it’s a great misunderstanding and it certainly doesn’t fit the whole tenor of Scripture, does it? I mean, we certainly don’t find anywhere in the epistles anyone telling anyone that they need to divorce. Just the opposite. Paul writes to the Corinthians that believers should stick it out even with unbelievers, and no believers should ever divorce, etc., etc. There’s just no advocacy for divorce, and yet the marriage permanence folks want literally tens of thousands, if not hundreds of thousands, of Christian couples to divorce because one or the other or both has been previously married.

Of course, to whatever degree it is adultery in God’s eyes when there’s a remarriage that takes place, it’s a singular act of adultery because at that consummation of that second marriage, it severs the covenant, the first one, and that’s it, because there’s adultery. That’s the end of it, but that doesn’t mean you’re living in adultery or that God wants you to divorce and so on and so forth.

We prove that from looking at Deuteronomy 24, the law of Moses. Of course, I know the marriage permanence folks, a lot of them would say that the law is irrelevant because Jesus brought a whole new law and laid down new rules. That’s a false premise and if you want to be challenged about that, I’ve written a couple e-teachings titled “Getting the Sermon on the Mount Right.” Those articles prove beyond any shadow of a doubt that Jesus was not bringing a new law because many times when He quoted, “You have heard it was said,” He wasn’t quoting from the law. It was clear He was quoting from the scribes and Pharisees, because what He said is not found in the law of Moses, and secondly the “new standard” that Jesus espoused is also already found in the law of Moses and so it’s not a standard at all, proving that that theory is totally wrong. But I don’t have time to go into that in this teaching.

We can rely upon Deuteronomy 24 and verses one through four as Jesus Himself speaking through the law of Moses and He said the woman who’s been twice divorced cannot go back to her first husband. That’s an abomination. Why? Jesus explained it. There’s been adultery committed as far as her first husband is concerned and that would be an abomination. That covenant has been severed by the consummation of the second marriage, but she’s free to marry anyone else besides her first husband.

Okay, Jesus was an endorser of the morality that is espoused in the law of Moses. Alright, Matthew 19, there’s a key passage of Scripture, of course. “Some Pharisees,” verse number three, “came to Jesus, testing Him and asking Him, ‘Is it lawful for a man to divorce his wife for any reason at all?'” History shows that that was widely believed by most of the spiritual leaders in Christ’s day, any reason divorce.

“He answered and said to them, ‘Have you not read that He created them from the beginning, made them male and female, and said,'” this is quoting from Genesis, “‘”For this reason a man shall leave his father and mother and join his wife. The two shall become one flesh?”‘” Jesus then comments, “‘There are no longer two but one flesh. Whatever God has joined together, let no man separate.'”

God’s saying marriage is designed by God to be a lifelong union. Hey! Wow, that’s a revelation. We all know that. We all know that and God never did it for anyone to get divorced. In Jesus’ day, divorce would be so commonplace, so easy. I’m sure God was pulling His hair out, saying, “What in the world?” Now, God did make a concession for divorce, and that’s exactly what the Pharisees bring up.

They said to Him, “‘Why, then, did Moses command to give her a certificate of divorce and send her away?'” I won’t comment on that, but that is a total misquote and misrepresentation of actually what Moses said, but Jesus avoided commenting on that misquote and just addresses the gist of what they’re saying, that there’s an allowance for divorce, obviously, in the law of Moses. Well, of course there’s an allowance for divorce. People are sinners. God made some concession as to what to do if there’s a divorce and what not to do if there’s a divorce. We read one of them in Deuteronomy 24. “If she ever gets divorced from her second husband, she can’t go back to her first husband.”

Jesus says in verse number eight, “‘Because of the hardness of your heart, Moses permitted you to divorce your wives. But from the beginning, it has not been this way.'” It’s never God’s will for anyone to get divorced, but does that mean that you remedy the divorce by divorcing your current spouse and going back? That’s never said in Matthew 19 or Matthew 5 or in Mark or Luke or in any of the epistles.

You don’t read the book of Acts of all the Christians getting divorces as they repent from their second spouses. Jesus then says the same thing He says, essentially, in the Sermon on the Mount. “I say to you, whoever divorces his wife,” now don’t forget this clause, “except for immorality, and he marries another woman, he commits adultery.”

There’s an exception, immorality or adultery, of course, is the exception. If he marries another woman and he divorced his first wife because she was unfaithful to him, he’s not committing adultery. You get it? See, that’s how God sees it. Adultery severs and ends the covenant, even if nothing else does in God’s eyes. That does.

If Jesus is defining the second marriage as adultery for all the parties that are involved, well, then that’s the severance of it all. When that marriage is consummated, it is wrong, it’s grievous in God’s eyes, but what’s done is done and so now God says, “What are we going to do to try to fix this?” He’s not saying, “Go back, divorce again and go back.” He forbids them to go back in the law of Moses, and that’s the fatal blow to the “marriage permanence” folks because, ideally, they’d have you go back to your first spouse.

I read you an instance in the very first part of this four-part series about a woman who saw a man in the worship team in her church who was married and she persuaded him that he had a fake marriage. That because the woman he was married to (with which he had five kids) had been previously married and was divorced and married him, their marriage wasn’t legitimate. She talked him into divorcing that woman and then she got him. Who could say that that’s right and good? Marriage permanence people probably will.

Alright, I settled my own heart and said what I had to say to get off my chest, and so I’ve said it. God bless everybody who disagrees. I’m trying to save Christian marriages. That’s what I’m trying to do, because that’s what I believe God’s trying to do. You don’t fix sin by sin, folks. Amen. Okay, that’s all for this little lesson. Thank you so much for joining me. God bless you.