How do you cope with the death of someone whom you love very much? 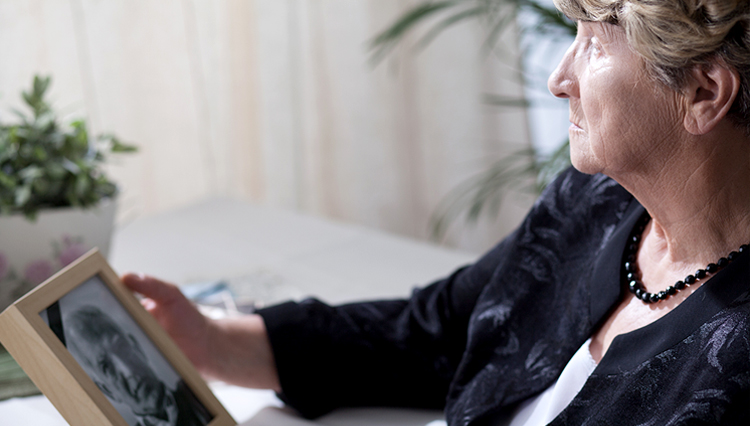 Hi, welcome to today’s Little Lesson. If you’re a subscriber or a regular reviewer of Little Lessons you know that it’s been a few weeks since we’ve published a new episode, and that’s because I’ve been doing the very thing that I’m gonna be talking about in this Little Lesson.

I’ve been coping with the loss of someone whom I loved and do love very much, namely my 86-year-old father named Herb who passed away about two weeks ago after a massive stroke, and in fact he is buried way back in the corner of this field on his property far behind me.

I miss him dearly, I was very, very, very close to my father. He lived with me and my wife for 18 years, and my mom lived with us for 14 years while she was still alive, so I was very close, every day interacting with my father, and about a year and a half ago he suffered a stroke that disabled him, and so we got very close because I was taking care of him very much so.

But when he passed away he was teaching a Bible study at an assisted living facility, and a lady asked him, “Herb, do you believe that whole Bible?” And he said, “I sure do.” And then he slumped over, and those were the last words he spoke. He was unconscious from then on for about five days, and of course myself and my sisters were there with him for many of those days talking to him.

Even though he couldn’t respond or didn’t respond, we were hoping that he could hear us and hear our words of love and encouragement because it was his time to go to his reward. And if we could see him now we wouldn’t be feeling sorry for him. In fact, this is one way that I coped and have been coping, all the tears that I’ve shed, I recognize I haven’t been feeling sorry for him. The best thing that could happen to anybody is that they go to heaven.

So it’s a lot easier to cope with the loss of a loved one who’s a believer than it is one who’s an unbeliever. And my dad was a sincere believer. He came to faith and Christ in mid life, but he really got it. He got the real deal, and it was evident by the fruit in his life, every day of his life from then on. And he died leaving a great testimony, having touched a lot of lives, here and in other parts of the world. He laid up a lot of treasure in heaven.

So that’s how I’m coping, to a degree, with the death of my father, knowing that he’s enjoying his reward in heaven now, and the treasures that he laid up there over the decades that he served Christ, he’s seeing Jesus and he’s basking in his glory. He understands a lot of things he didn’t understand, a lot of questions he had have all been answered, he’s been reunited with my mom who passed four years or so before him, and with a younger brother of mine who passed when I was just a teenager. And with his parents, and other loved ones who’ve gone before him.

So how do you cope with the death of someone whom you love very much? For a loved one who’s a believer, you just take comfort in knowing the truth that we believe, that’s part and parcel of the Gospel, that those who die in Christ are in the presence of the lord. To be absent from the body is to be present with the lord.

And this time that now I’m apart from him, it’s been a couple weeks now, and it could be years or decades before I see him again, but that’ll just be like a blink in eternity. So I take some comfort knowing that I will see him again.

As Paul wrote to the Thessalonians, “We do not grieve as those who have no hope.” Those that don’t have any hope, those who don’t know Christ, they think, “This is the end, I’ll never see him again.” And it’s such a hopeless thought. But we grieve, how can we help but not grieve? That’s natural, that’s normal, and anyone who says that you shouldn’t be grieving, that’s not what the Bible says. We grieve not as those who don’t have hope, we grieve with hope. We’ll see those loved ones again.

Now, what about someone you love who didn’t know the lord? That’s a little bit more difficult, and how do you cope? Well, Christians believe that there’s a heaven and a hell, and most Christians believe that hell, like heaven, is forever, just as we in heaven will be experiencing the eternal bliss and also ultimately the new heavens, the new Earth, all that, so those who have died without Christ who are getting what they deserve … Because those who believe in Christ escape getting what they deserve because Jesus bore their sin and becomes effectual because they believed in him … They get what they deserve, who didn’t believe in him, they’ve rejected him, and so they are punished accordingly.

Now, I struggled with that for many years, because I didn’t see how it could possibly be fair, how someone could, no matter how evil they were during their lifetime, how it could ever warrant eternal conscious torment in hell? And I stumbled upon some Christians and some theologians who were espousing a doctrine called annihilationism, which is a doctrine that contradicts the traditional view of hell as being a place of eternal conscious torment, rather it’s a place of just punishment ending in annihilation. So the person, their spirit, their soul, ceases to exist. They have no consciousness any longer.

And as I studied that out, I was very surprised to see all of the scriptural evidence that they had for that viewpoint, and that the traditional viewpoint of eternal conscious torment, it kinda hinges and rests on about six key scriptures. But there were well over 100, and some even count a couple of hundred, that would support the idea that the wicked are eventually annihilated after they reap what they sow, after they get what they deserve.

I actually wound up studying it and writing three articles on annihilationism, which, if you’re interested … Because I’m talking about how to cope … And honestly, thinking about someone suffering consciously, eternally, in hell, the only way Christians cope with that is they just try not to think about it, there’s no other way. Because if you thought about it, it would drive you crazy.

Actually, to be perfectly honest with you, I think it’s one of those beliefs that Christians say they believe, but I think there’s evidence that they really don’t actually believe it. Why do I say that? Well, here’s one proof. Christians have children, biological children, and of course they have no guarantee that those children will ultimately believe in Christ. They train up a child in the way you should go, I know these promises, but there’s plenty of examples of Godly people in the Bible whose children went wayward and died outside of faith, and died evil. Anyone who says every Christian has Christian children needs to take the blinders off because that’s just not so. I’ve been around for a few decades here, I’ve seen a lot of that.

So here’s my point. If Christians really believed that there was a chance that the children whom they bring into the world could wind up suffering eternal conscious torment in the flames of hell, they would never take the risk, they would never have children. So what I’m suggesting is that’s indication that they really don’t believe it, even though they say they believe it.

So anyways, there’s a lot of interesting scriptural evidence to support the idea of annihilationism. Some folks watching this, they will say, “Oh, you’re a heretic, I’m turning you off, I’ll never listen to you again.” But I was just like you, so I’m gonna be totally loving and merciful to you and say, “That’s okay.” But I’m not a heretic, I’m trying to serve Jesus.

But you owe it to yourself, because every Christian I’ve ever talked to says they wish hell wasn’t forever. If there’s one thing they could change about God that’s what they would change, isn’t that interesting? So you owe it to yourself to investigate it, and I’ve done all the work for you. So go to davidservant.com, type in annihilationism, kind of a big long word, or annihilation, and you’ll find those articles. I think it will interest you. I may not persuade you, although I have persuaded some people, but at least you’ll be educated in what you don’t believe.

All right. My dad, his body’s back there in that corner, one day it’s gonna come out of the ground, and that helps me to cope with his passing. Thanks for joining me, God bless you.