I wrote the article that follows in 2005. It is a true story about an incident that occurred when I was pastoring my last church. I’ve since discovered that my article has been published on hundreds of Christian websites and forums. Interestingly, I’ve also discovered my article published on scores of Muslim websites, but always with any reference to Christianity or the Bible removed.

In any case, I thought it would be good this month to re-publish ‘The Brownie Surprise’ for the benefit of those who have never read this classic e-teaching. Enjoy and apply! — David 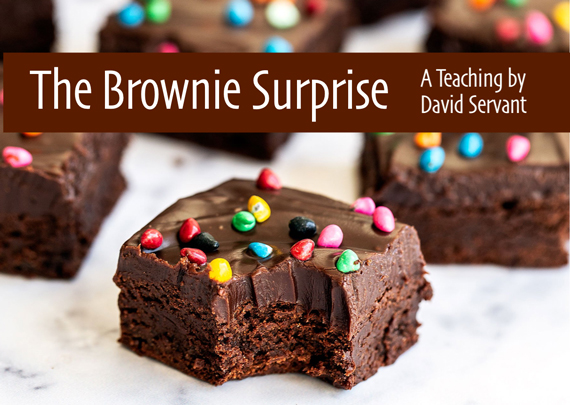 Some years ago when I was a pastor, I walked into my church office after a Sunday morning service to find a sandwich bag on my desk containing three chocolate brownies. Some thoughtful and anonymous saint who knew my love for chocolate had placed them there, along with a piece of paper that had a short story written on it. I immediately sat down and began eating the first brownie as I read the following story:

Two teenagers asked their father if they could go to the theater to watch a movie that all their friends had seen. After reading some reviews about the movie on the internet, he denied their request.

Dad replied: “Because that movie contains nudity and portrays immorality, which is something that God hates, as being normal and acceptable behavior.”

“But dad, those are just very small parts of the movie! That’s what our friends who’ve seen it have told us. The movie is two hours long and those scenes are just a few minutes of the total film! It’s based on a true story, and good triumphs over evil, and there are other redeeming themes like courage and self-sacrifice. Even the Christian movie review websites say that!”

“My answer is ‘no,’ and that is my final answer. You are welcome to stay home tonight, invite some of your friends over, and watch one of the good videos we have in our home collection. But you will not go and watch that film. End of discussion.”

The two teenagers walked dejectedly into the family room and slumped down on the couch. As they sulked, they were surprised to hear the sounds of their father preparing something in the kitchen. They soon recognized the wonderful aroma of brownies baking in the oven, and one of the teenagers said to the other, “Dad must be feeling guilty, and now he’s going to try to make it up to us with some fresh brownies. Maybe we can soften him with lots of praise when he brings them out to us and persuade him to let us go to that movie after all.”

About that time I began eating the second brownie from the sandwich bag and wondered if there was some connection to the brownies I was eating and the brownies in the story. I kept reading…

The teens were not disappointed. Soon their father appeared with a plate of warm brownies which he offered to his kids. They each took one. Then their father said,

“Before you eat, I want to tell you something: I love you both so much.”

The teenagers smiled at each other with knowing glances. Dad was softening.

The brownies looked mouth-watering, and the teens began to become a little impatient with their dad’s long speech.

“But I want to be perfectly honest with you. There is one ingredient I added that is not usually found in brownies. I got that ingredient from our own back yard. But you needn’t worry, because I only added the tiniest bit of that ingredient to your brownies. The amount of the portion is practically insignificant. So go ahead, take a bite and let me know what you think.”

“Dad, would you mind telling us what that mystery ingredient is before we eat?”

“Why? The portion I added was so small. Just a teaspoonful. You won’t even taste it.”

“Come on, dad, just tell us what that ingredient is.”

“Don’t worry! It is organic, just like the other ingredients.”

“Well, OK, if you insist. That secret ingredient is organic…dog poop.”

I immediately stopped chewing that second brownie and I spit it out into the waste basket by my desk. I continued reading, now fearful of the paragraphs that still remained.

Both teens instantly dropped their brownies back on the plate and began inspecting their fingers with horror.

“DAD! Why did you do that? You’ve tortured us by making us smell those brownies cooking for the last half hour, and now you tell us that you added dog poop! We can’t eat these brownies!”

“Why not? The amount of dog poop is very small compared to the rest of the ingredients. It won’t hurt you. It’s been cooked right along with the other ingredients. You won’t even taste it. It has the same consistency as the brownies. Go ahead and eat!”

“And that is the same reason I won’t allow you to go watch that movie. You won’t tolerate a little dog poop in your brownies, so why should you tolerate a little immorality in your movies? We pray that God will not lead us unto temptation, so how can we in good conscience entertain ourselves with something that will imprint a sinful image in our minds that will lead us into temptation long after we first see it?

I discarded what remained of the second brownie as well as the entire untouched third brownie. What had been irresistible a minute ago had become detestable. And only because of the very slim chance that what I was eating was slightly polluted. (Surely it wasn’t…but I couldn’t convince myself.)

What a good lesson about purity! Why do we tolerate any sin? On the day of the Passover, the Israelites were commanded to remove every bit of leaven from their homes. Sin is like leaven—a little bit leavens the whole lump (1 Cor. 5:6). Jesus, “our Passover” (1 Cor. 5:7), and sin, don’t mix.

Help us, Lord, to “cleanse ourselves from all defilement of flesh and spirit, perfecting holiness in the fear of God” (2 Cor. 7:1).