Are we living during the beginning of the end times? Bible teacher David Servant discusses this possibility in this episode of Little Lessons. Learn more! 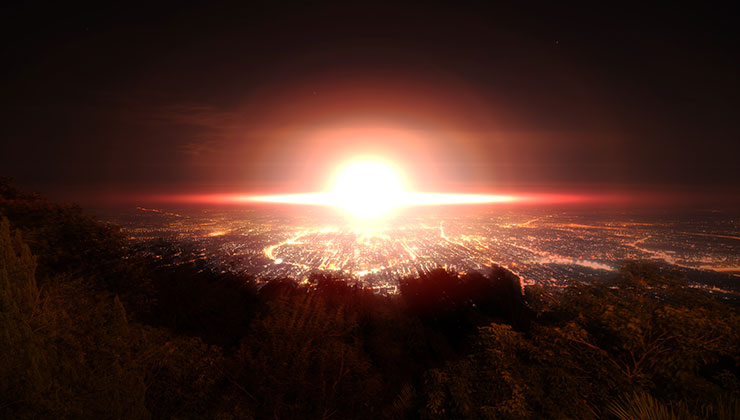 Is this the beginning of the end?

Today we want to talk about what’s going on around the world. A lot of Christians are looking at some of the current events, like myself, and wondering is this the beginning of the end? Because we’re blessed as believers, we know the future. You think about how incredible that is, and we take that for granted. Think about if you’re not a believer and you don’t have faith in the word of God, and again, it’s stupid not to have faith in the word of God.

This book has proven itself to be 100% accurate so far in predicting the future, and it’s been doing that for hundreds and hundreds of years. It’s irrefutable. And so know there’s still things in the word of God that have not been fulfilled yet, and we know something about the last days and the end times. And so we’re looking therefore at what’s happening in our world right now during this pandemic that’s circling the globe, the coronavirus and all of the political turmoil and upheaval.

Just yesterday, there was a horrible blast in Beirut, Lebanon, where I think currently they had the death count at 135 people and thousands of people injured and so forth. Hundreds of thousands of people are now homeless, and that’s a country that’s already been suffering so much because of the influx of refugees from the Syrian war and so on and so forth. And those who are watching current events know that the world is in upheaval and the United States government keeps printing and borrowing more and more money, increasing the national debt. Trillions of dollars just in the last few months in order to keep this economy going that has been shut down in part by the virus and so forth, and so times are interesting.

I’d ask you to, first of all, think however about other times in human history and even recent, fairly recent human history when things were even worse. I’m 62-years-old, and so I’m certainly not able to remember World War II, but can you imagine the folks who were living during that time and what they were thinking? Is this the end of the world and we we’ve got battles going on all over the world and people are trying to take over the world and so forth. It fits the end time scenario quite well.

And yet all that stuff passed and things actually got a lot better. And so that’s always a possibility that we ought to consider when we’re in times like this, because it’s so easy just to say, “Oh my goodness, this has to be the end of all things.” And again, people have thought that many times in the last couple of thousand years, that surely this is it and it’s all being set up and so forth. And so let’s leave room for that possibility.

However, that being said, we do know enough about the end times to be able to look at current events and make some very interesting observations. Now we know the big deal, one of the big characteristics of the end times, of course, is the rise of the antichrist, that’s unmistakable in Revelation and a couple of Paul’s writings. And he obviously does rise to power in part through military conquests, and we’re, of course, not seeing that anywhere that I’m aware of.

But before the antichrist comes to power, comes to greater power through military conquest, of course, he has to come to power politically and through some kind of political posturing or intrigue and then circumstances have to be set up in that region where he first begins to gain power. Again, Hitler, wasn’t just singing in the choir one day and then decided, “I think I’ll just try to take over Europe,” the next day. He had to rise to power in Germany and circumstances had to be ripe for his very nationalistic message to be embraced by so many of the people in Germany at the time, you see.

So that’s interesting because what we’re seeing in the world today, the world’s sharing one big problem, and it’s an economic problem spawned on, at least in part, by the Coronavirus. And we’re, here in America, we’re all already hearing there’s a shortage of change, coins. I wonder what’s precipitating that? I’m sure that there’s some reason, there’s going to be some logical reason. But some people think, “Well, they’re just setting us up. They’re going to eliminate change and then pretty soon they’re going eliminate cash. And then it’s going to be everyone has to have a card and it has to have their ID associated with it. And then, of course, there’s going to be the chip in the hand or on the forehead and no one will be able to buy or sell.”

And so we’re seeing the little gravitation and by those tiny little signs. And we’re also seeing a rise in openness to the ideas of greater degrees of socialism and which means, of course, much more government control and all based on the idea of equality and some of these so-called moral ideals. That we are our brother’s keeper and so even if our brother is a lazy bum and a liar and a thief, we owe him some money. Some of our money, which of course is not biblical at all.

But anyways, there’s a much greater openness. We see that particularly among the millennial generation and much more inclined to say the government ought to be running things more and they ought to be taken the money from wealthier people and redistributing it to the poor. And we know that always winds up in economic disaster. Anybody who’s ever studied communism and the higher forms of socialism knows it’s doomed to failure.

I think it was a Margaret Thatcher who said something to the effect of, “Socialism, it works great until you run out of other people’s money.” That’s exactly the truth. Well, with the national debt, of course increasing, you can’t just keep borrowing money forever. You have to have enough money to make the payments. And you can’t, as a government, you just can’t keep printing money.

Another sign of our economic turmoil here is the price of gold. It has really shot up over the last, I guess, year or so, and it’s reached higher levels than ever before. And some economists and folks like myself will actually hold to the idea that actually gold doesn’t ever increase in value. It’s only worth so much. It takes so much work to get gold out of the ground. There’s only so much gold out there and so forth and so that’s what it’s worth. And so gold doesn’t really fluctuate in price. It’s the currencies, so the dollar and other currencies, which people use to buy gold, that’s decreasing in value.

Well, that happens when governments print money. That’s the definition of inflation. When governments create money out of thin air, because anyone can print paper and say, “This is worth something.” That’s what the government does, and as long as people believe that, it works. When people stop believing that, it doesn’t work any longer, and that’s going to happen actually. It’s happened many times historically around the world where governments just print themselves and oblivion.

In Zimbabwe, for example, there was a time when they were printing, I think one trillion Zimbabwean dollar notes, and people were using them as toilet paper because they were absolutely worthless. And so these are things that we see that can precipitate what would ultimately lead to a one world government, people being open to that idea politically, turmoil where nations are going to be rising against nations, as Jesus said, and that’s when the antichrist is going to play his cards and so forth and come out on top. And that’s when the persecution of the Christians, because we’re going to be the really bad guys. They’ll be calling us the haters, because we’re not going to take the mark of the beast. We’re not going to bow down to the anagrams.

You understand the antichrist ultimately claims to be God and the people of the world by and large believe it. And so you can’t be a Christian and say, “The antichrist is God.” And so that could cause you to lose your life. All right.

So these are things. So I would say yes to answer the question that I posed at the beginning of this lesson. I would say, yes, we’re at the beginning of the end times. How long it will stretch out? I don’t know, and it is very possible that all of these things could be overcome just like World War II eventually ended and things got better for quite a while. That could happen. But I guess that’s not what I’m thinking anyways.

Until next time, may the Lord bless you richly.